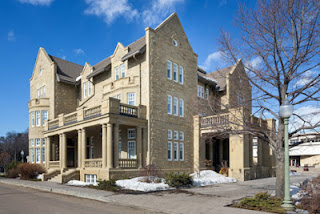 Government House sits on land purchased by the provincial government in 1910; the completion of the official residence of the Lieutenant Governor was completed in 1913. It was the official residence of the Lieutenant Governor until 1937 at which time the Government pulled funding for the operation of the house following a spat with Lt Gov. Bowen. The house was sold shortly thereafter and served as a boarding house for American Pilots who were ferrying supplies for the construction of the Alaska Highway and afterward as a military hospital during the second world war. After the war it was used as a convalescent hospital for wounded military personnel. The province acquired the building once again in 1964 and plans were made to construct the Provincial Museum nearby.   Wholesale renovations followed although the building has never again served as a residence.

Members of the Canadian Royal Family and visiting foreign dignitaries are greeted at the ceremonial porte-cochere seen on the right in this photo. Inside are reception rooms, conference rooms and support facilities; it is here that the Lieutenant Governor presides over swearing-in ceremonies for Cabinet ministers. Queen Elizabeth and Pope John Paul II have visited government house.

While not in use, members of the public can take tours of the building at no cost. On display are artifacts and original pieces of furniture from the building's time as a residence, and information is also provided about the building's restoration and current functions.
Posted by Jim Dobie Photography at 5:00 AM