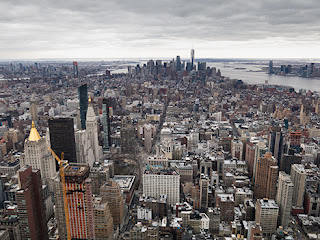 When I was kid we had this set of books in the house that resembled encyclopedias.  They were called the 'Books of Knowledge'.  I don't know how many times I looked at the pages describing the Empire State Building which was, at the time the books were published, the tallest building in the world; status it held from the time of completion in 1931 until the north tower of the World Trade Centre claimed the title in 1970.  When the WTC towers fell following terrorist attack in 2001 the Empire State Building reclaimed the title of tallest building in New York until completion of the One World Trade Centre tower in 2012. 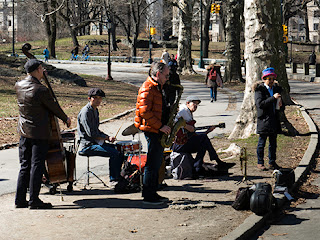 On our first full day in NYC I took a morning walk to Central Park. There was a bit of a pop-up concert in progress.  They were quite good and a fair size crowd had gathered.
Posted by Jim Dobie Photography at 5:00 AM No comments: 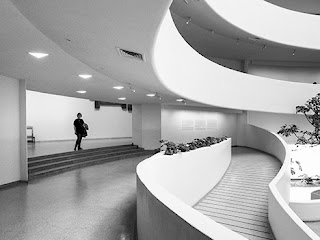 It's been decades since Frank Lloyd Wright's Solomon R. Guggenheim Museum entered by consciousness. It opened in October of 1959, ten years after the death of the man for which it was named and six months after the death of Wright.  It's important to include some people in architectural photographs; I persuaded this cute girl from Canada to strike a pose so I could get this picture.
Posted by Jim Dobie Photography at 6:40 PM No comments: 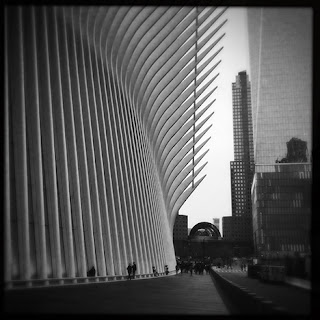 The Oculus is the new $4 billion dollar train station that replaces the PATH train station that was destroyed in the 9/11 attacks.  By any measure it is an absolutely stunning piece of architecture.
Posted by Jim Dobie Photography at 5:00 AM No comments: