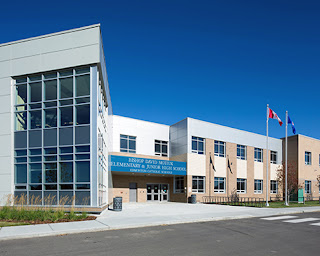 I've lost track of how may schools I've photographed in the last few years - but it's a lot.  This is the latest in west Edmonton.
Posted by Jim Dobie Photography at 5:00 AM No comments: 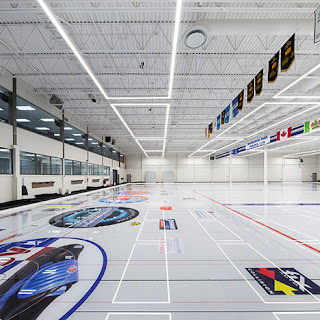 The newly modernized Glen Allan Rec Centre features a curling facility.  This photo was taken one day before the start of the curling season which, when in full swing, goes each day from morning until quite late at night so my window of opportunity for photos was a narrow one.

When I arrived crews were on hand putting the finishing touches on the ice surface and I got a short lesson in how it's done which is, I learned, a complicated task requiring skill and patience.  And if you mess up you'll hear about it.  An interesting thing is that at the start of the curling season the rocks are no where in sight - they are missing in this photo.

When the ice has had it's final flooding (which had just occurred when this photo was taken - that's a thin layer of water over the frozen sub-base) and the top coat of water has frozen only then are the rocks brought forward.  But they cannot be placed on the ice because they are at room temperature and would melt into the carefully prepared ice surface.  Instead, they are placed on snow fencing acting as a carpet allowing air to circulate all around the rocks for at least 10 hours.  After 10 hours the rocks are frozen and only then can they be put onto the ice surface for the start of another curling season.

Canon 1Dx with Canon 17mm TSE lens; ISO 200, 1/5 second exposure at f/11.  Multiple image capture with RAW files edited in Adobe Lightroom.  Final image made by merging top and bottom half of the image in Adobe Photoshop.  Final edits also made in Photoshop.

Special thanks to the staff at the Glen Allan Recreation Centre for facilitating this photo shoot. Hurry! Hard!
Posted by Jim Dobie Photography at 5:00 AM No comments: 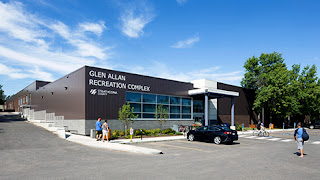 This Recreation Centre in Sherwood Park recently underwent a major modernization.  I photographed it for the builder.  The tricky part is that only the entrance was changed on the exterior so while virtually the whole building was updated on the inside the exterior looks much the same as it did before the renovations.  But I still wanted to convey some sense of the building size in the photo; this photo seems to capture it all I think.
Posted by Jim Dobie Photography at 5:00 AM No comments: 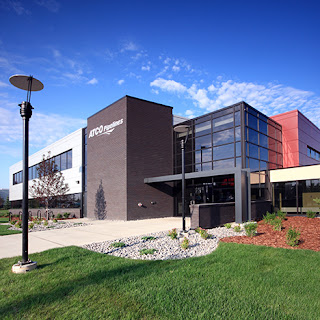 This is a building I photographed in 2008.  It was my first paying assignment.  I've just been asked to photograph it again because it's been added onto.
Posted by Jim Dobie Photography at 5:00 AM No comments: 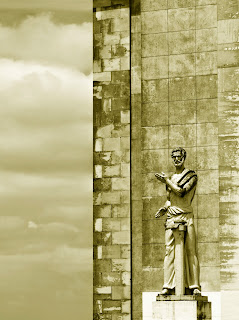 Here's a photo taken in Portugal in May of 2013.
Posted by Jim Dobie Photography at 9:58 AM No comments: