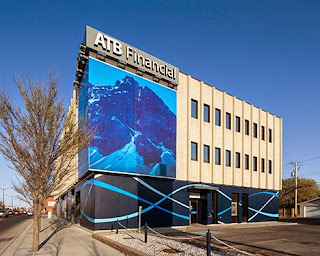 For this assignment the client wanted day and night photos of this recently updated financial services building.  Normally that's not a problem; I take one set of images in the day time and another in the evening.  In this instance this created a challenge because the building is a three hour drive from my home base.  And the front of the building faces north so daylight only spreads across the front of the building for a few hours in the early morning and again in the evening.  Lastly, when in full leaf the trees along the road obscure most of the new features on the building.

I have an iPad app that tells me where the sun and moon are at in given location and day.  Using this app - and a reliable weather forecast - I was able to determine the optimal time of day for the photos.  The daylight photos were taken around 7 pm and it took me about an hour.  Then hung around for the sun to set and the lights to come on for the evening photos.  Then I saddled up and hit the road for home.  A late night, but such is the life of an architectural photographer. 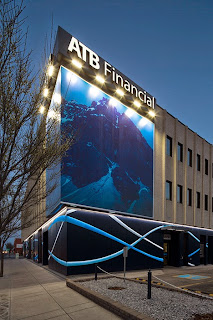 Posted by Jim Dobie Photography at 5:00 AM No comments: 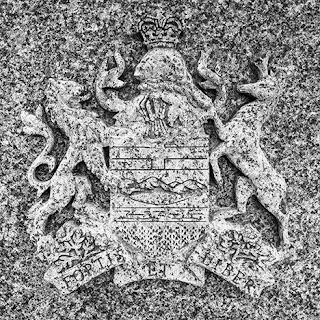 Carved into granite at the Edmonton Federal Building, the provincial coat of arms of Alberta bears the motto 'Fortis et Liber' (strong and free).  The coat of arms was adopted in 1907 by Royal Warrant and was augmented in 1980 and again in 2008.  You can read more about the coat of arms att: http://en.wikipedia.org/wiki/Coat_of_arms_of_Alberta
Posted by Jim Dobie Photography at 5:00 AM No comments: 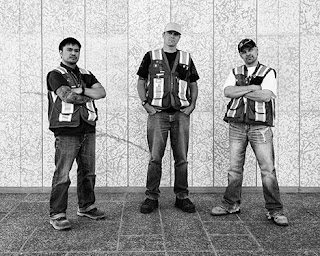 When people see me set up at an architectural shoot there's usually someone who asks if I want to take their picture.  It's usually some over refreshed joker who thinks he's quite hilarious.  It's always a guy, women never ask.

And then there are other times; when someone who's along to facilitate the shoot suggests that a photo might be in order.  This photo comes from such a request.

I was on assignment at the Edmonton Federal Building when Rennie - that's him on the right - suggested that a quick shot of him and his mates would be a good idea.  I almost always have my 24-70 f/2.8 lens with me so I grabbed it and set the lads up against this Tyndall stone wall.  I told them I wanted serious expressions with loads of attitude.  They came through in spades.

I don't know the fellow in the centre at all, but Rennie and Dave (on the left) and I have known one another for a while.  If you want to know what top class professional builders look like, here's your chance for a good look.
Posted by Jim Dobie Photography at 7:40 PM No comments: 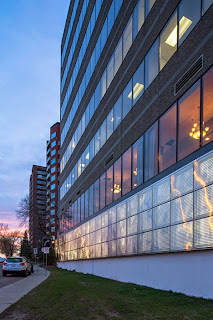 My client for this assignment asked me to take some photos at dusk to capture the effect of the setting sun on the back lit metal panels. Under these lighting conditions I have to be ready and get on with it; optimal lighting for these shots only lasts a short time.
Posted by Jim Dobie Photography at 6:30 AM No comments: 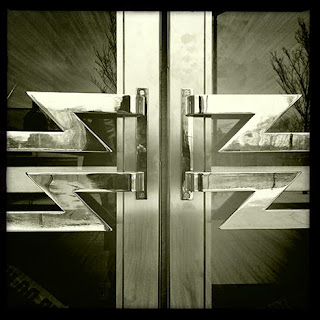 These have to rate as the coolest door pulls in Edmonton; renewed door hardware at the Edmonton Federal Building.  Design by Kasian Architecture Interior Design and Planning; construction by Clark Builders.
Posted by Jim Dobie Photography at 5:00 AM 1 comment: 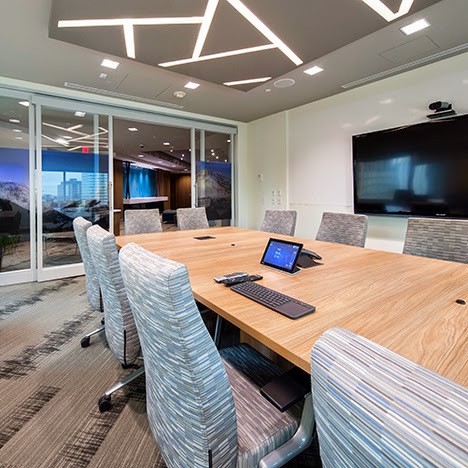 This board room photo is significant because it includes a view of the conference centre reception area in the background.
Posted by Jim Dobie Photography at 5:00 AM No comments: