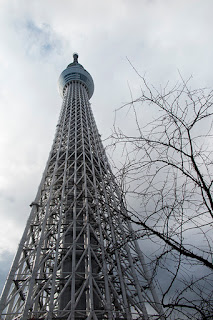 The Tokyo Sky Tree is the world's tallest communication tower  It took 4 years to construct and tops out at 623 m (2080 feet) to the top of the spire.  By comparison, the CN Tower in Toronto is a mere 596 metres (1954 feet) in height.  There are 2 observation platforms; one at 350 metres and the other at 450 metres.  It is a spectacular structure and the ascent to the observation decks is lightening fast and remarkably smooth.  Tokyo is prone to earthquakes and the tower has successfully endured many.

Wikipedia reports: "The tower has seismic proofing, including a central shaft made of reinforced concrete. The main internal pillar is attached to the outer tower structure for the first 125 meters (410 ft) above ground. From there until 375 meters (1,230 ft) the pillar is attached to the tower frame with oil dampers, which act as cushions during an earthquake. Additional resilience is achieved through an "added mass control mechanism" (or tuned mass damper) - a damping system which, in the event of an earthquake, moves out of step with the building's structure, to keep the center of gravity as central as possible to the tower's base.[15] According to the designers, the dampers can absorb 50 percent of the energy from an earthquake.

...all that and looking elegant at the same time.

Posted by Jim Dobie Photography at 5:00 AM