Winter in Edmonton at Victoria Park 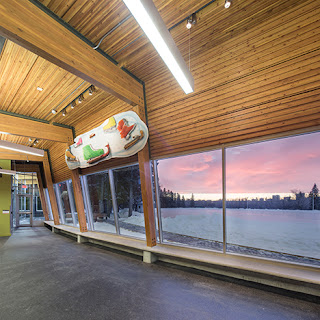 A few years ago the City of Edmonton held a national competition open to architects for the design of a series of pavilions for a number of Edmonton parks.  The program for each was rather loose - one of the requirements was that the pavilion had to be appropriate for the normal use of the park.  The city was not obliged to build any or all of the pavilions but they have constructed several.

This is the new pavilion at Victoria Park in the River Valley.  Victoria is one of Edmonton's oldest parks and is a picnic park in summer and a skating park in winter.  The Edmonton Speed Skating Association trains here and are tenants in the pavilion which is open to the public as well.  Previously there was nowhere to put your skates on, nowhere to leave your stuff and no washrooms.   All that has changed now.  This design was executed by Rayleen Hill Architecture of Dartmouth, Nova Scotia.  This photo was part of a series of images commissioned by Rayleen.

Having officially opened on Dec 19, just in time for Christmas, this pavilion - and the others already completed around the city - are a great gift to the citizens of Edmonton.  Tax dollars can't be just for police, pipes and pothole repairs; both the body and the soul need to be fed after all.  No doubt many Christmas calories will be burned off over the holidays with a few laps of skating at  the new Vic.


Posted by Jim Dobie Photography at 5:00 AM