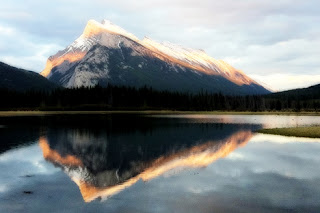 Every now and then I go back through older photo archives and often I come across images that I skipped past or set aside altogether that seemed to warrant a little attention.  This is such an image.  I took it with my iPhone in 2012 along the shores of Vermilion Lakes in Banff National Park.  As you can see, it was nearing dusk and the light was fading.  I have found that the images taken with an iPhone are amazing even in low light, but they can be a little grainy.  Or quite a lot grainy when viewed on a larger screen.  None the less, I liked this scene and the photos I took that evening, mostly I like the coral-coloured fringe along the mountain top and the reflection of it in the water.

To get rid of the grain I used the 'Orton' technique; a method developed by Michael Orton.  Originally a fairly labour intensive technique used in film photography where 2-3 negatives were stacked to make a print, the photographer would make one image that was perfectly exposed and precisely focused.  Then a second image of the exact same seen would be made slightly out of focus and a couple of stops over exposed.  Then the two negatives would be sandwiched together in the printing process.  To achieve this look with film one had to decide to employ the process at the time the photos were taken and you had to use a tripod so that the negatives could be exactly aligned for stacking together later.  Knowledge of the technique and lots of advance planning and decision making was a requirement.  And you'd probably have to do the printing yourself - most labs would not want to be bothered with the fussing around and all that negative handling.  In the digital age, any single photo made with any digital camera (or phone) can be used to achieve much the same effect.  The steps are simple and the result is a nice, soft, slightly ethereal image.

If you'd like to give this technique a try I recommend the instructions at:

Posted by Jim Dobie Photography at 10:01 AM