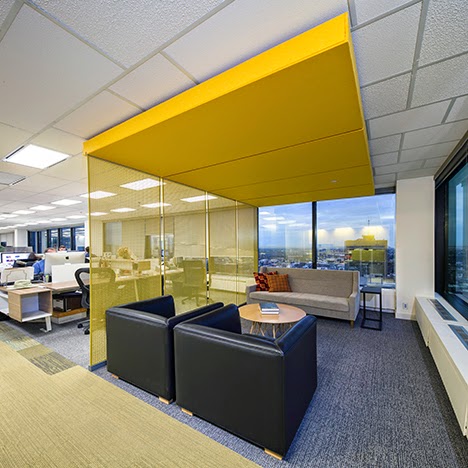 This scene presented a number of challenges.  There are multiple light sources - fluorescent fixtures, daylight and some halogen task lighting.  This corner of the office is a little dark so some supplemental lighting would be needed too but I needed to be careful with that due to the potential for reflections off all the glass.  Even dealing with my own reflection in the glass was a consideration.  Lastly, there wasn't a lot of room in which to work.

I used my 17mm tilt/shift lens to deal with the space limitations - this lens allows one to take the bottom and top half of the scene and fuse them together using Photoshop. To fill in the dark corner I used a Canon 580EX flash that I simple held overhead and triggered manually - the exposure was 4 or 5 second long so I didn't need to worry about synchronizing the flash with the shutter.  I made several exposures at different light temperatures, duplicating the process so that I had a range of images of the bottom and top half of the scene.

The RAW files were edited in Adobe Lightroom.  I then opened the files in Adobe Photoshop and began the process of blending and balancing the various light temperatures.  When I had a top and bottom image that looked realistic I then merged the two halves together in Photoshop.  The last step was to clone out my reflection - and that of the camera - and make some final exposure and contrast adjustments.

It is an important aspect of the interior design so it was worth putting in the effort though.
Posted by Jim Dobie Photography at 5:00 AM