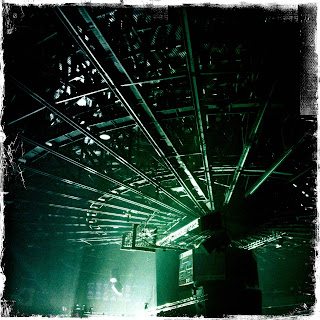 Maybe I'm a bit weird (on the other hand I suspect this may be an established fact) but I spend a lot of time at events looking around at everything accept what is happening on stage; the events surrounding theses events are intriguing to me.

This is a shot of the Rexall arena roof structure.  Opened in 1974, the radiating giant trusses of Rexall Place are joined in the centre by a large bolt plate.   To construct this a scaffold is erected in the centre of the building and each truss is set into place.  It is all quite unstable until each truss is in place and securely bolted.  When the scaffold was removed the centre of the roof deflected by about 2 feet which is exactly what it was designed to do.

Modern rock concerts can achieve spectacular sound and lighting effects with equipment that is light when compared to was used at concerts earlier.  The structural engineer who designed this roof frequently got calls in the years after from the arena owners wondering ﻿if it was alright to hang many thousands of pounds of speaker and light clusters from the structure.  He himself is a fan of opera and not rock concerts ands so he usually had a disparaging remark or two about this kind of request, but permission was always granted.  Just think of all the big names that have performed under this roof!  Elton John, Stevie Wonder, Van Morrison, Bob Dylan, Leonard Cohen, Metallica and now Paul McCartney.
Posted by Jim Dobie Photography at 5:00 AM