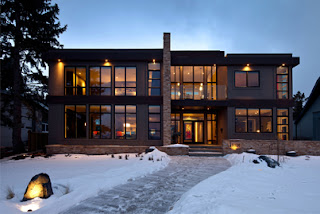 The steps in creating this photo were much the same as used in the photo from yesterday's post - only the final back and white conversion step was ommited.

The architect wanted a photo that demonstrated the transparent aspec of this house; given the time of year I opted for a dusk photo.  I had to hurry, just after these photo were taken it began to snow heavily.