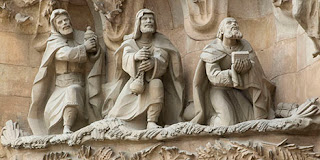 This detail photo of the Nativity Facade on Antoni Gaudi's Sagrada Familia in Barcelona features the three wise men carved in stone.  They are depicted with their gifts of gold, frankincense and myrrh for the new born King.  We all know what gold is but what about the other two things?

Myrrh is a natural gum-like resin from the Commiphora Myrrha tree.  It was used as a perfume and because it was thought to have an intoxicating effect it was also used medicinally.  Frankincense is also a sap like substance taken from the Boswellia Sacra tree.  Like myrrh. it was used in perfumes it was also as incense.

Merry Christmas!
Posted by Jim Dobie Photography at 5:00 AM