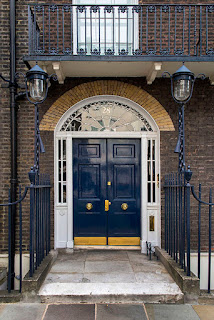 There's more than meets the eye in this photograph - all of it told to me by an expert London guide.  The location is an elegant street just north of St. James Palace and east of Green Park.  The doorway dates from an era where houses had no number assigned; rather, the occupants stationery would feature an image of the fan light above the door - every house on the street would feature a unique fan light.  The doorway itself would have been the full width of the opening - no narrow side lights (the white bit either side).  This was to accommodate the hoop skirts worn at the time.  The wide door was a problem because they were poorly fitted and therefore drafty.  When the hoop skirt went out of fashion the tight-fitting wide doors were done away with soon after.

And you thought it was just a picture of a blue door.
Posted by Jim Dobie Photography at 5:00 AM