Strange Stuff in the Aftermath 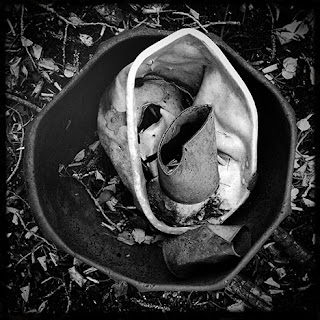 If you venture off the usual footpath you'll find some strange stuff.  On mothers day weekend there was a grass fire near our local off leash park.  It came very close to some houses and if allowed to burn a few minutes longer it would have wiped out a grove of Saskatoons that the dogs and I always stop at in August when the berries are ripe.

I went in to investigate the remains just a few days ago and came across these old cooking vessels and the remains of what might have been a soup can - all stacked neatly as you see them here.  Who know how long they had been in the bush and tall grass - could be decades - and why they were there at all.  t could be that someone had set up camp and when they moved on these were left behind.  Anyway, the geometry appealed to me and thus this picture was taken.  Because it had been raining the image had a lot of contrast without my doing anything to the photo by way of editing; this images was created using my favourite iPhone app; the amazing Hipstamatic.
Posted by Jim Dobie Photography at 5:00 AM