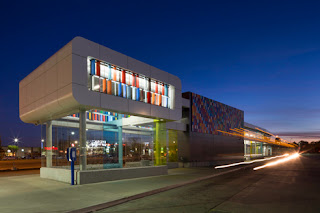 A few years ago Edmonton Mayor Steven Mandel declared that with respect to architecture in the city our 'tolerance for crap is zero'.  City of Edmonton projects have taken a turn for the better since then as demonstrated by the new Northgate Transit Centre.  This is the busiest transit station in Edmonton (I had a lot of company whilst on this shoot including a visit from two chaps who had emerged from a nearby tavern where they had clearly been over served.  The wished to engage in a conversation regarding the troubles in Syria).  The city tasked the architects with developing a design that would provide more than just shelter for this waiting on buses.  The building is bright, functional adorned with public art and it conveys an appropriate sense of movement created by the clever continuity of the building cladding as it bends and folds from roof surface, walls and strong horizontal application.


I think the charm of this photo is the streaking lights on the right - without that the photo would not be as powerful.


Posted by Jim Dobie Photography at 5:00 AM