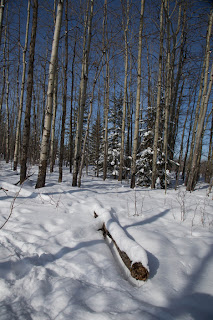 As time goes by I find my ability to 'see' the final photo before I even take it improves.  When I trip the shutter I know exactly what I'm going to do with the RAW file in the editing/post production process.  In this case I had two possibilities in mind; either the log in the foreground would be a prominent element or it wouldn't be part of the image at all. Either way the photo was going to be cropped square and converted to black and white.  In the end I opted to crop the photo so the fallen log would not be part of the final image.

I used Adobe Ligthroom for the initial edit and cropping (the RAW file was a little underexposed and it is crocked).  I then exported the RAW file to Nik Silver Efex Pro for the black and white processing.  This software gives a wide range of editing controls as well as some presets that show the effects of simulated filters as well replicating characteristics of various black white films and papers.  Black and White photos - film and digital - are far more complicated than their simple name would imply - there are an infinite range of choices to be made in the editing process. 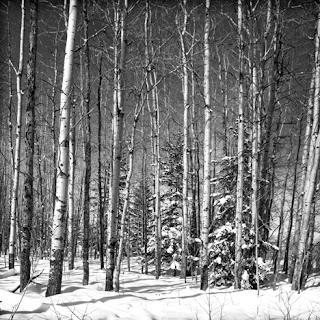 Final editing and cropping was made in Adobe Photoshop CS4.  Canon 1Dx with Canon 24-105 lens.
Posted by Jim Dobie Photography at 5:00 AM