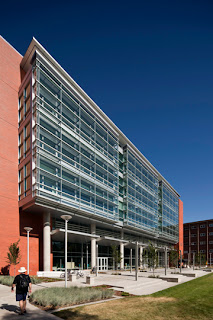 The Centennial Centre for Interdisciplinary opened on a Weekend; Alumni Weekend as it turned out.  The weather was spectacular and there were people everywhere.  The timing of my shoot was delayed until this weekend because the landscaping was protected to the last moment with temporary fencing.  There were also balloons tied to railings and little directional signs placed everywhere.  Ugh I thought as I arrived....this is going to take some effort.

The signs were removed in photo shop for the most part.  But where I could I waited until something or someone blocked these elements for me.  That chap in the lower left is blocking the view of the some of this stuff.  And the trees that thankfully still had some leaves on them block - mostly - the hot dog stand placed right at a building entrance.
Posted by Jim Dobie Photography at 5:00 AM